18th International Roundtable for the Semiotics of Law 2017 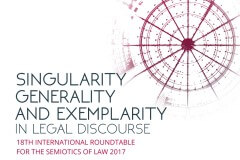 International Roundtable for the Semiotics of Law

The use and practice of exemplarity are rooted in classic rhetoric, literature, politics and law. Because of the shift from pre-modern to modern ways of thinking â€“ as modern knowledge came to privilege abstraction over exempla, the general over the singular and particular â€“ exemplarity lost its way.

The aim of this Roundtable is to discuss how in the contemporary legal discourse exemplarity regained relevance in human and legal thought: it constitutes the â€œcompromiseâ€ between different orders: positive law (civil law, common law) and natural law, general and particular, abstract and concrete, societal and individual. Exemplary judgments (at a national and at an international level, e.g. Landgericht KÃ¶ln â€“ N. 151 Ns 169/11; Enel v. Costa; Scordino v. Italy) bridge the divide between traditional dichotomies, such as Common Law/Civil Law and positive law/natural law â€” by linking the ordinary (cases that are already described by a norm, which provides for them) and the extreme (cases that challenge the normative order because they are not yet provided for by law).

In its many forms, exemplarity entails the dialectical oscillation around an internal divide: whether it comes as paradeigma or paradigm, as exemplum, exemplar, or mere instance, as Exempel or Beispiel, as model or precedent, exemplarity mediates between the singular and the general. Especially in philosophy, the use of examples has often been devoted to the mere didactic illustration of general concepts for those unable to understand them without assistance from concrete cases or instances. â€œExamples are thus the go-cart of judgment,â€ as Immanuel Kantâ€™s well-known dictum goes, â€œwhich he who is deficient in that natural talent cannot afford to dispense withâ€ (CPR: B 174).

Natural law re-emerges through exemplarity in the form of the â€œjustâ€ reason in the specific case: the single narrative in the single case challenges the ratio legis by proposing a new and different ratio. The particular and the universal are given in the same form through the exemplary case because they express a contradiction between extra-legal values and abstract and general rules.

Abstracts of 300 words (max.) can be submitted by 1 December 2016 to Angela Condello (angela.condello@uniroma3.it) and Peter Goodrich (goodrich@yu.edu) with participation decisions made by 1 January 2017.