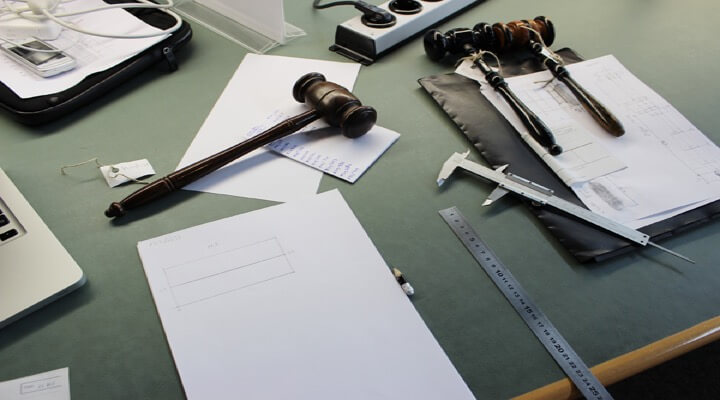 Melbourne Law School and Liquid Architecture present a series of performances, presentations and experiments conducted in Court 8A at the Federal Court Building, Melbourne.

There is a reason it’s called a hearing. , oaths are sworn, testimony is delivered, judgement pronounced: and all this out loud, viva voce. Contemporary courtrooms are wired for sound. The microphone is becoming a condition of legal practice. Trials are intensely mediated: video-linked, transcribed, recorded, compressed and archived; the judicial soundscape no longer limited to the phenomenological range of those physically present.

Sound is essential to the administration of justice, an inalienable part of our legal worlds. But not just any sound. Listen carefully. What do you hear? To begin with, silence: a powerful quiet. Mobiles are switched off. Conversations whispered. Soundproofing isolates against the volume of daily life. The judicial soundscape depends on and entrenches an association between silence and civility, noise and disorder, with an exceptionally long pedigree in the West and elsewhere. In the courtroom, silence is figured as the proper condition out of which legal discourse emerges.

The opening of proceedings. An aggressive cross-examination. Latinisms. A witness stumbling to make themselves understood. The portentous eloquence of a barrister in closing. In a word, words. Speech, discourse, dialogue. And in court, this speech acts; subtended by the power of the state, the threat of handcuffs and incarceration, a violence that may or may not remain latent but which is required to sustain the operation of law.

A courtroom is not a gallery.

Legal practice is, of course, highly aesthetic and theatrical, yet in its imagined pursuit of justice according to rule and dispassionate reason, the law expends great energy on the denial or repression of this fact. The aesthetic is everything that law, in the West, is not supposed to be. The courtroom and gallery exist in tension: each insisting that they are not the other.

This insistence is our point of departure. Sometimes it is only from the edge that the centre becomes clearly discernible. Precisely by transgressing, over-reaching and extending the ordinary principles of courtroom o/aurality, attention can be drawn to them. They can be made audible, and so susceptible to critique. Then again … What constitutes a transgression when the court is not ‘in session’? When is a courtroom just a room? How much does the courtroom remain one even when it has been offered up as a gallery?

Joel Stern is Artistic Director at Liquid Architecture, an Australian organisation for artists working with sound.

James Parker is a senior lecturer at Melbourne Law School, where he is also director of the research program ‘Law, Sound and the International’ at the Institute for International Law and the Humanities.

Sean Dockray is a Melbourne based artist writer of text and code, founding director of the Los Angeles non-profit Telic Arts Exchange, and initiator of knowledge-sharing platforms, The Public School and Aaaaarg. His work concerns sharing economies and the perpetual present of networked platforms.

Grace Koch is a Visiting Research Fellow at the Australian Institute of Aboriginal and Torres Strait Islander Studies (AIATSIS) and a Visiting Senior Research Fellow at the National Centre for Indigenous Studies, Australian National University.  At Acoustic Justice she will be presenting reflections on her AIATSIS paper “We have the song, so we have the land: song and ceremony as proof of ownership in Aboriginal and Torres Strait Islander land claims.”

Nathan Gray is a Berlin-based Australian artist and performer whose work extends from studio and on site experiments. Improvising with the given, the found and the already-made Gray approaches objects and locations as scores for action.

Sara Ramshaw is an Associate Professor at the University of Victoria Law School. Her book, Justice as Improvisation: The Law of the Extempore (Routledge, 2013), was nominated for the 2014 Socio-Legal Studies Association Hart Book Prize.

Diego Tonus is an artist living and working in Amsterdam and London. At Acoustic Justice he will be presenting excerpts and images from Processing Authorities, a work in progress that evolves around an anonymous and singular group of hammers owned by the International Institute of Social History (IISH) in Amsterdam.