Manus Recording Project Collective: where are you today 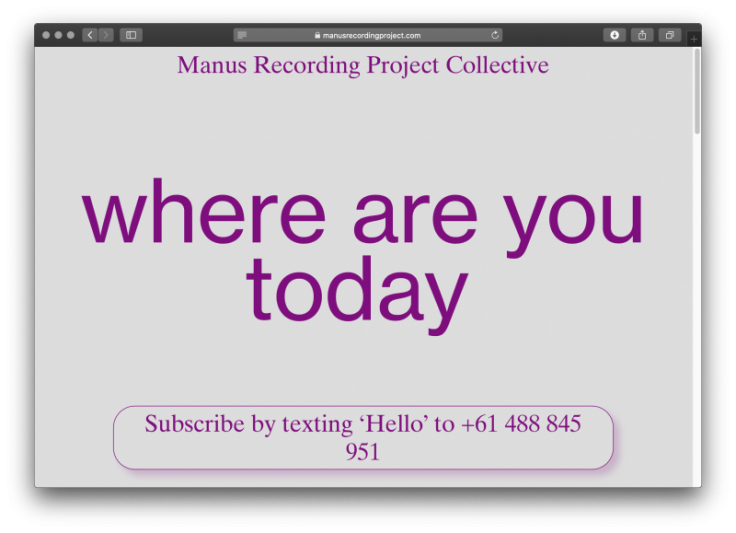 where are you today is a new work by Manus Recording Project Collective, continuing the collective’s practice of documenting, sharing and circulating audio recordings from inside Australia’s on- and off-shore detention centres for refugees and asylum seekers.

where are you today will comprise a new set of ten-minute audio recordings, produced and delivered via text message over the course of one month, by Farhad Bandesh, Farhad Rahmati, Samad Abdul, Shamindan Kanapathi, Thanush Selvraj and Yasin Abdallah. These men, seeking asylum by boat, were forcibly transferred to Manus Island by the Australian government nearly seven years ago. Now, they are held in hotels or detention centres in Port Moresby, Melbourne or Brisbane.

As a subscriber of where are you today, you’ll receive a daily text message containing a link to each day’s recording. The site will display some additional information: the number of kilometres between you and the person who made the recording, and the number of minutes, hours, or days that have elapsed since the recording was made.

Subscribe by texting ‘Hello’ to +61 488 845 951
Read more about where are you today at manusrecordingproject.com

This work follows 2018’s how are you today, in which six men detained on Manus Island, Papua New Guinea—Abdul Aziz Muhamat, Behrouz Boochani, Farhad Bandesh, Kazem Kazemi, Samad Abdul and Shamindan Kanapathi—along with Michael Green, André Dao, and Jon Tjhia, their collaborators in Melbourne (together, the Manus Recording Project Collective), produced fourteen hours of audio, comprising eighty-four recordings, each ten minutes long. The resulting archive, accessible as part of the museum exhibition Eavesdropping, and online, represented an acoustic record of the men’s indefinite internment at the hands of the Australian Government.

Design, development and conceptual support by Public Office.
Commissioned and presented by Liquid Architecture.
Supported by the City of Melbourne COVID-19 Arts Grants and Behind the Wire.