You are here:
Call for Papers and Submissions 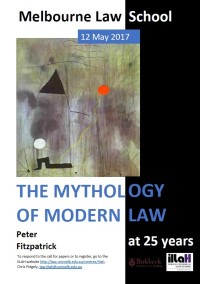 In the opening sentence of Peter Fitzpatrickâ€™s seminal book, The Mythology of Modern Law, first published in 1992, the claim that â€œlaw as a unified entity can only be reconciled with its contradictory existences if we see it as mythâ€ is described as the first chapterâ€™s â€œsuspiciously simple argumentâ€. Few perhaps would regard even that sentence, let alone the argument of the chapter or the book, as simple. What are lawâ€™s â€˜contradictory existencesâ€™? What does the author mean by myth? By what mode of reconciliation shall we come to understand the idea of a unified law as myth?

None of these are, of course, simple questions. The claim to simplicity, like the book itself, is a provocation. Its simplicity lies in the audacity of its challenge: everything you think you know about the foundations of modern law, and their relationship to myth, is wrong, and more pointedly, inverted. If this appears to be hard to grasp, the author seems to gesture, itâ€™s not because of the complexity of the argument but because of how conditioned we have become to the claims that modern lawâ€™s foundations are solid.

The provocation is also a generative invitation â€“ an invitation to think through the implications of modern lawâ€™s supposedly coherent, secular and universal pretension being exposed as contradictory, mythic and imperial.

In considering the (still unfinished) legacy of The Mythology of Modern Law, this workshop seeks to engage with the scholarship of those who have responded to Fitzpatrickâ€™s provocative invitation or been influenced by his thinking, whatever their field of study.

We are interested in receiving proposals about papers on (but not limited to) the following suggested topics:

The workshop will be held on Thursday 11 and Friday 12 May 2017, at Melbourne Law School, University of Melbourne, Australia. If you would like to present a paper, please send an abstract of up to 500 words to Chris Pidgely, law-iilah@unimelb.edu.au by 28 February 2017. If you would like to attend but not present a paper, please email Chris. A registration link will soon be available on the IILAH website. Unfortunately, no funding for travel or accommodation is available to participants. There is no charge to register for the event. Any enquiries can be directed to Sundhya Pahuja, s.pahuja@unimelb.edu.au.

Graphic Justice in Times of Crisis
21/09/2020
Dangerous Supplements: The Work and Significance of Peter Fitzpatrick
16/06/2020
Go to Top