You are here:
BooksCall for Papers and Submissions 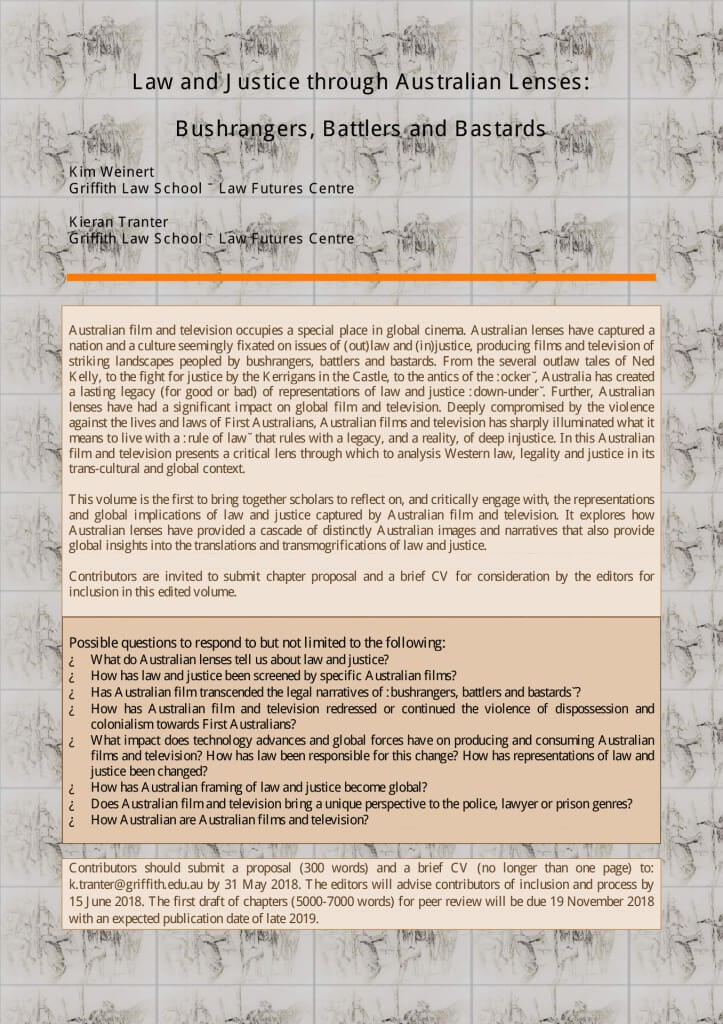 Australian film and television occupies a special place in global cinema. Australian lenses have captured a nation and a culture seemingly fixated on issues of (out)law and (in)justice, producing films and television of striking landscapes peopled by bushrangers, battlers and bastards. From the several outlaw tales of Ned Kelly, to the fight for justice by the Kerrigans in the Castle, to the antics of the ‘ocker’, Australia has created a lasting legacy (for good or bad) of representations of law and justice ‘down-under’. Further, Australian
lenses have had a significant impact on global film and television. Deeply compromised by the violence against the lives and laws of First Australians, Australian films and television has sharply illuminated what it means to live with a ‘rule of law’ that rules with a legacy, and a reality, of deep injustice. In this Australian film and television presents a critical lens through which to analysis Western law, legality and justice in its trans-cultural and global context.

Contributors are invited to submit chapter proposal and a brief CV for consideration by the editors for inclusion in this edited volume.

Possible questions to respond to but not limited to the following:

Contributors should submit a proposal (300 words) and a brief CV (no longer than one page) to: k.tranter@griffith.edu.au by 31 May 2018. The editors will advise contributors of inclusion and process by 15 June 2018. The first draft of chapters (5000-7000 words) for peer review will be due 19 November 2018 with an expected publication date of late 2019.